Ask Academy with Sarah May

Just before Christmas, we ran a week-long writing clinic on Twitter, where our tutors answered your writing questions every lunchtime. The conversations proved so interesting and informative, we decided to share them here.

Here’s Sarah May, fielding queries on the right time to edit, knowing when an idea is ‘The One’ and forming good writing habits.

FA: Hi, Sarah! Alright, our first question came from one of our Instagram followers: ‘Whenever I start writing a novel, I end up disliking my idea really quickly. Where do your ideas come from and do you ever have to push past the temptation to drop an idea before it’s got legs? Or do you think if you’re struggling with an idea from the off, it’s probably not the right one?’

SM: A few things here: first up, you will never know if an idea is ‘the right one’.  No writer does. Going down this path will send you mad because you’ll be constantly looking at your novel from the outside rather than the inside.

Key to getting ‘inside’ your novel is focussing on character rather than the idea. You need to do a 180 here. Stop thinking of your novel in the abstract and instead start thinking of it as a physical landscape peopled by characters. Whenever you sit down to write, what you’re actually doing is spending time with a group of people you will come to know intimately. I’m talking long-term relationships here, so make sure you create the kind of characters you’re happy to make that commitment to. It will change the way you write.

FA: I love that. That’s kind of blown my mind, actually – that idea of the novel as landscape is such a brilliant way of thinking about it. Alright, our second question now: ‘How can I make sure my dialogue feels natural?’

SM: Let’s start by talking about bad dialogue. Bad dialogue is when a writer uses a character as a vehicle for info-dumping. When this happens, there’s usually an excessive amount of uninterrupted dialogue and the reader loses track of who is saying what because essentially it doesn’t matter.

Good dialogue works in the opposite way. It comes from character. What a character says and how they say it is unique to both them and the situation. Unlike bad dialogue, it is reactive. Responsive. Supple. Dexterous. A character should never simply deliver lines. Good dialogue is a conversation/exchange between two or more characters.

Another thing to think about is choreography. What is a character doing while they are speaking? How are they moving about the space where the dialogue is taking place? The last golden rule is, less is more. When it comes to dialogue, make every word count.

FA: Brilliant advice, thank you! A question from Twitter now, although this is one we hear a lot: ‘Should we edit while finishing our first draft or wait until the end?’

SM: If the writing is going well and you have narrative momentum, don’t break off. Just keep on writing and try to get that first draft out of your head and onto the page/screen. Especially if you’re a procrastinator!

And regardless of whether or not the writing is going well, I would advise pushing on past that 25–30k marker. It’s when most first-time novelists give up on a story and abandon it. The graveyard of unfinished stories. So, try to push past this. Most writers can expect to work on anything between 8–12 drafts of a novel. There’s no point expecting your first draft to look anything like your twelfth!  First draft is a rush – it’s like falling in love. Don’t put the brakes on unless you really have to!

FA: This is so so true – what is it with that 25–30k point that brings ALL the doubts out to play? Okay, we’ve got a related one up last, actually: ‘I struggle to keep up writing regularly. Do you have any advice for that?’

SM: When we write, we use our creative muscle. It’s something we all have because humans are natural born storytellers. The more regularly we use it, the more we can make it work for us.

So, it’s important to build that writing habit in order to build that creative muscle. Half an hour a day is enough. Honestly! Just try to make it the same time each day and then your mind gets used to.

Don’t set yourself unrealistic targets. If you know you’re only going to be able to write for half an hour a day, don’t set yourself a 1000 wordcount goal. You won’t achieve it, and every time you fail to achieve it, you’re giving yourself a reason not to write the next day rather than a reason to write. You don’t have to set yourself a word count goal, but if you are someone who’s responsive to deadlines, etc. 200 – 300 words a day is enough. That will soon grow to around 1500 words a week, 6000 words a month… you see where I’m going with this? 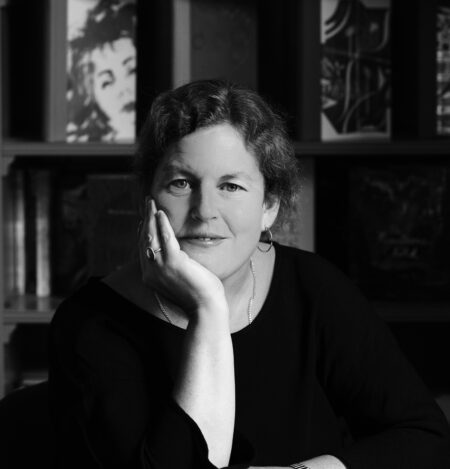 Sarah May is the highly-acclaimed author of seven novels, including The Nudist Colony, which was short-listed for the Guardian First Book Award. Her second novel, Spanish City, was shortlisted for the Encore Award, and The Internationals was longlisted for The Orange Prize. She is also an experienced playwright, and in 2000 set up The Mayhem Company, a London-based theatre company for young people, with partner and theatre director, Ben May. Sarah has been a freelance writer and tutor of creative writing for over fifteen years.

Sarah is a tutor on our six-month Writing a Novel course – more information here.